Weird Food Delicacies and Their Country of Origin 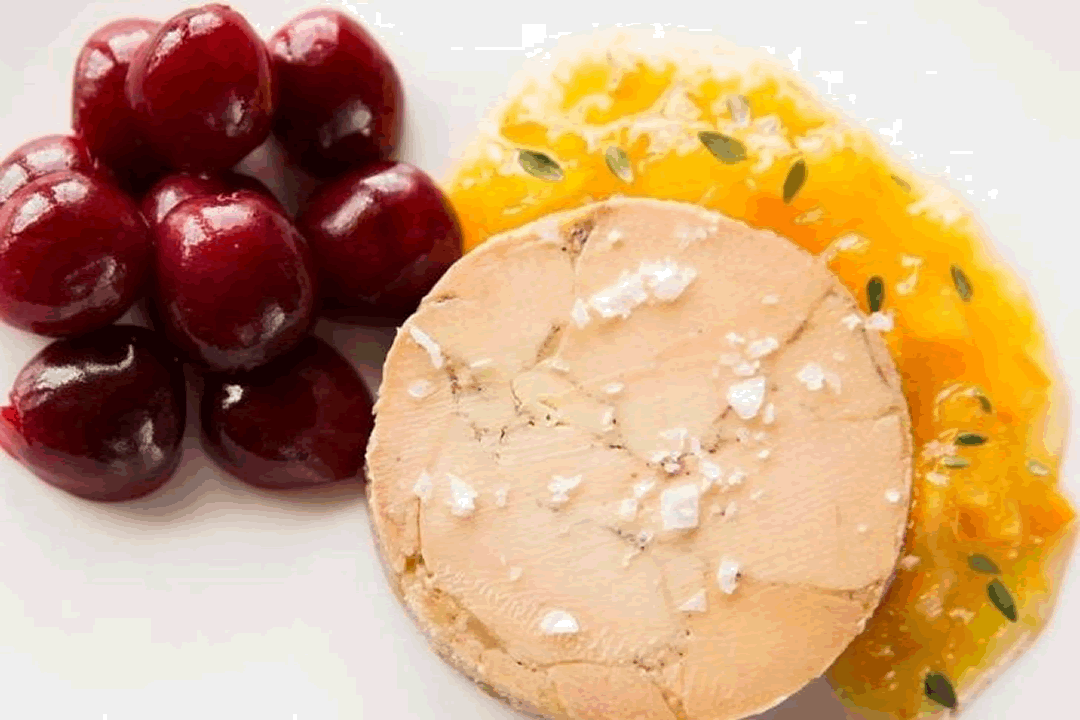 Food is everything to us, and it makes our whole world go round. It’s a balm to our stomach and soul, and will always be the perfect medicine for a broken heart, overstressed mind, and a tired body. But more than just being one of our must-haves to survive, food also represents identity not just for an individual but for a country as a whole. Notice how we easily connect a particular dish or delicacy to its place of origin just by its taste, appearance, and its ingredients? For example, the way we connect kimchi to South Korea because of all the K-pop fandom going on; or how we trace sushi to Japan.

You see, food embodies the cultural roots of our homeland. A simple dish can quickly tell a story the same way that paintings, songs, and books do, which is why countries put out attractive investments on TV commercials, ads, and campaigns to showcase their unique culinary masterpieces and attract more foreign tourists. Although there are some mouthwatering dishes out there, there are those which border into the weird and are often unappetizing to other people. And here are just some of those brow-raising weird eats that you definitely need to try out during your next visit 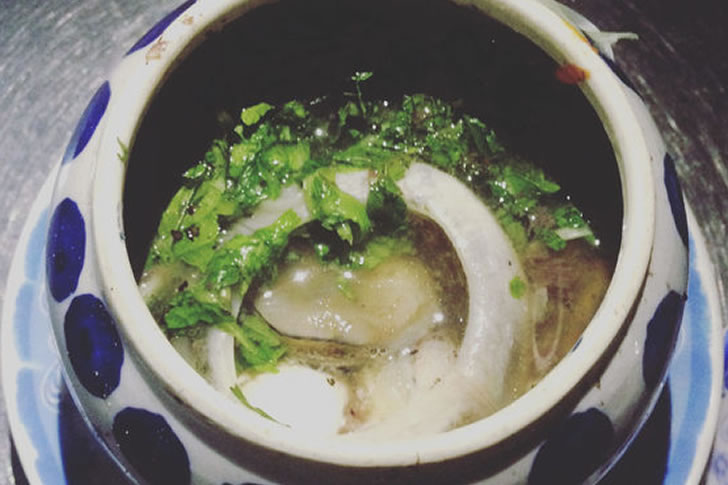 In every Japanese bar or izakaya — like what the locals call it — you would feel a lot of eyes staring at you. It is not because of people having an interest in you but the eyeballs in the tuna waiting to be your appetizer. Tuna eyeballs are not your typical kind of eyeballs; they are enormous in size, often as big as a tennis ball. Chefs usually cook them by braising them in some soy sauce and mirin; sometimes they sautee them with sesame oil and ginger. Once cooked, the tuna eyeballs became chewy on the outside but soft as jelly on the inside.  Local customers who’ve tried this appetizing investment compare their texture and taste to hard-boiled eggs, squid, and mussels. 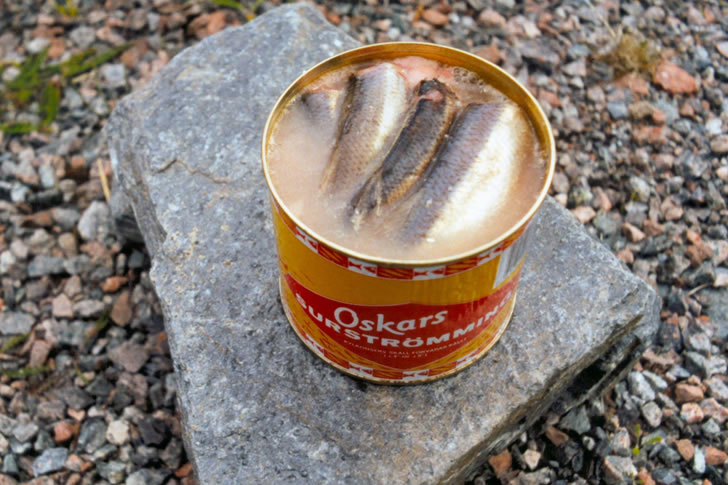 The next delicacy, often described as the smelliest food in the world, is called surstromming and is from Sweden. Surstromming is made from fermented Baltic Herrings, which are fish found only in the Baltic Sea that contains minerals, healthy fatty acid, protein, and vitamins. Baltic Herrings is considered the most economically important fish in Sweden and Finland because of its abundance in the Baltic Sea. However, because of Baltic Herrings’ abundant catch, there is a threat of it being rotten. The locals try to avoid wasting fish and often decide to ensure shelf life by preserving the fish in a kind of fermentation. This birthed the infamous delicacy surstromming. Although the dish releases an undesirable smell, locals still patronize and love to eat this delicacy. 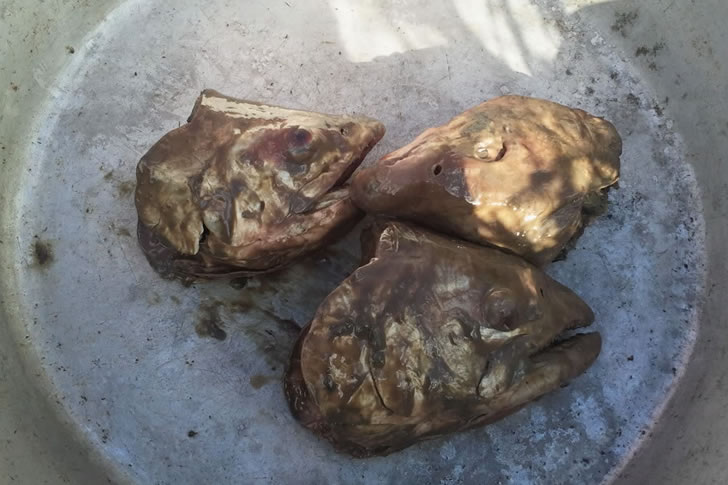 Stinkhead is another delicacy made from salmon and is a unique dish from Alaska. Salmon is considered a staple in the diet of the people in Alaska. Since salmon is their primary source of food, the locals use every part of the fish and make sure that there are no parts wasted. The locals practice fermentation; what they usually do is remove the head of the salmon from its body and prevent wasting the head by fermenting it. The result is a pungent smell through every fermentation process, which is why they decided to call these fermented salmon heads stinkheads. Stinkheads have now become a famous delicacy in Alaska, despite their incredibly insufferable smell. To the delicacy’s credit, many in the region find it delicious, however strange it might smell or taste to visitors. 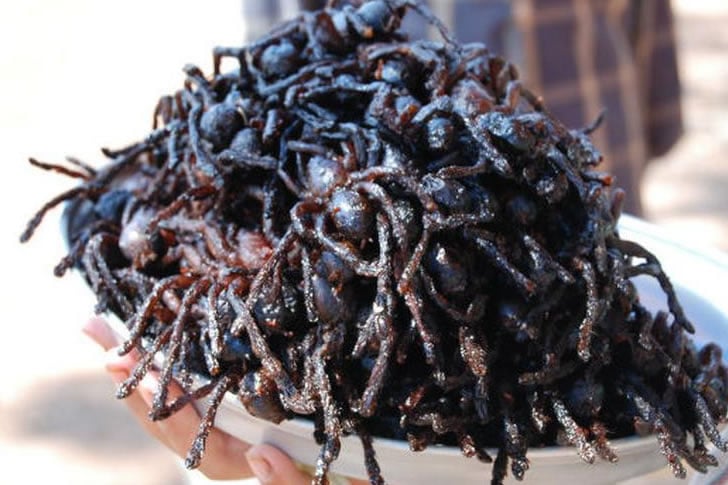 Many people love their food fried, but would you still love it if it is a Fried Spider? For some people, spiders can be among the scariest things that they can encounter, but spiders are a food source for Cambodians. Spiders became their traditional food staple when a city in Cambodia called Skuon became infested with spiders. The locals in the city solved their starvation problem through their investments in making spiders one of their food staples. The locals found a way of eating the spiders by cooking it. Tarantulas, which are among the spiders they eat, are breaded and deep-fried in boiling oil.  The fried spiders usually come with a pile of rice or noodles, and it is a typical meal in Cambodia. 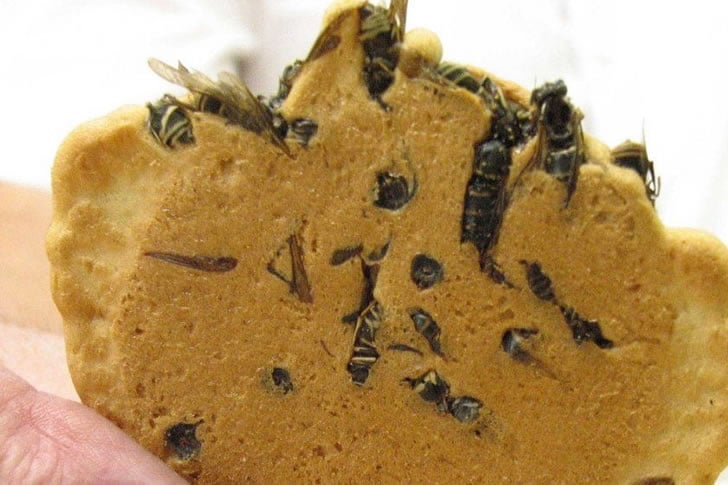 Snack lovers will, to some degree, probably like this unique snack from Japan called Wasp Crackers. It originated from Omachi village. Veteran gastronomes in the village hunt for digger wasps. Digger wasps, which are used as the main ingredient for jibachi senbei, their local term for wasp crackers. They first boil the wasps then dry it before adding the rice cracker mix. Then they will bake and cut it into round shapes. Locals love this unique snack because of the sweetness from the rice cracker combined with the wasps’ savor flavor. The wasps in the crackers are like burnt raisins, according to a taste reviewer. The snack could be strange for some tourists, but the locals patronize it a lot. 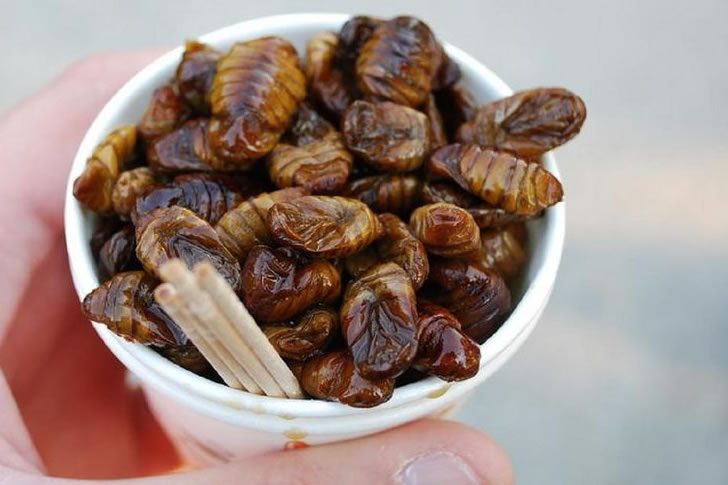 Beondegi is a famous street and snack in South Korea. This delicacy originated as a wartime snack during the Korean war.  People during that time considered it as the most nutritious food that soldiers can snack on. The food consists of silkworm pupae. The silkworm pupae are steamed and served in small cups with savory seasoning added for flavor. Sometimes they make a sweeter version of it by adding sugar. The street food was very popular with the locals and they can purchase it everywhere; it was even made available in supermarkets as canned goods. Aside from snacks, Korean restaurant owners serve Beondegi as a side dish. The locals became invested in serving Beondegi because of the nutritional value it has — silkworm pupae have loads of proteins and they are, to some degree, a great alternative to lean meat. 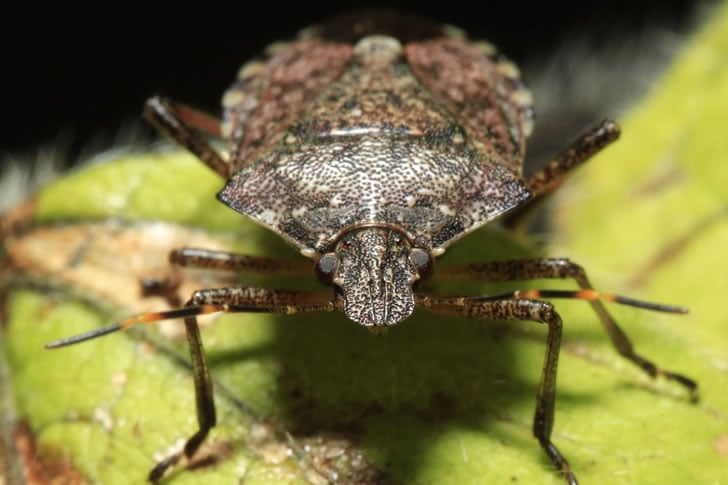 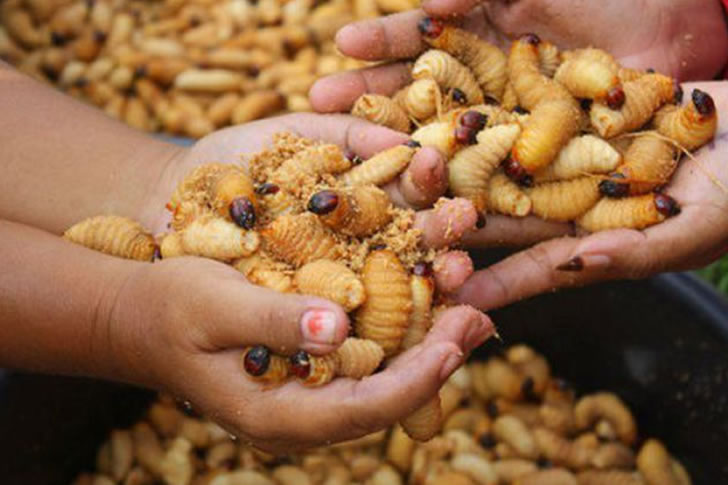 For some, Sago Grubs are something they would not dare to eat. But not for the South East Asians. Sago Grubs are part of their exotic dishes. Sago Grubs are larvae of the Capricorn beetle, and they are about 1 1/2 inches long. The larvae have a white color and a dark brown head; it has a plump body that, when bitten into, will have juices from the inside bursting into your mouth. It may seem disgusting and undesirable, but the larvae are edible and nutritious. Knowing its nutritional value, locals became invested in eating the larvae as part of their diet. Some people eat it raw, while some cook it by frying and roasting before eating it. People say that, to some degree, it looks more disgusting than it tastes. 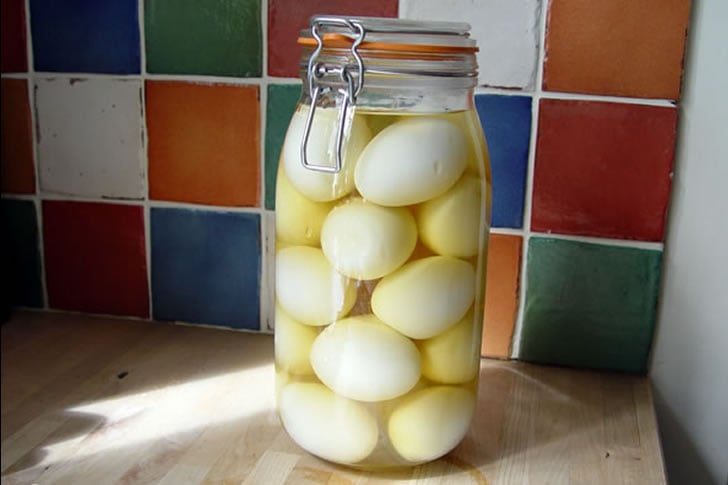 People have tried different ways of cooking eggs. This includes different ways of frying it, including it in other dishes, and the other various experiments that were done to it in its boiled form. But the United Kingdom brought eggs to the next level by coming up with pickled eggs. Because of their cold environment, locals could not develop embryos in the egg to produce a chick. To save their eggs, the locals resorted to pickling it. This gave birth to pickled eggs. The locals, to their credit, came up with an ingenious way to ensure their eggs don’t spoil. However, there is no need to pickle eggs anymore in the present time because of new technology. But some people still do it because they’ve come to love the taste of pickled eggs. 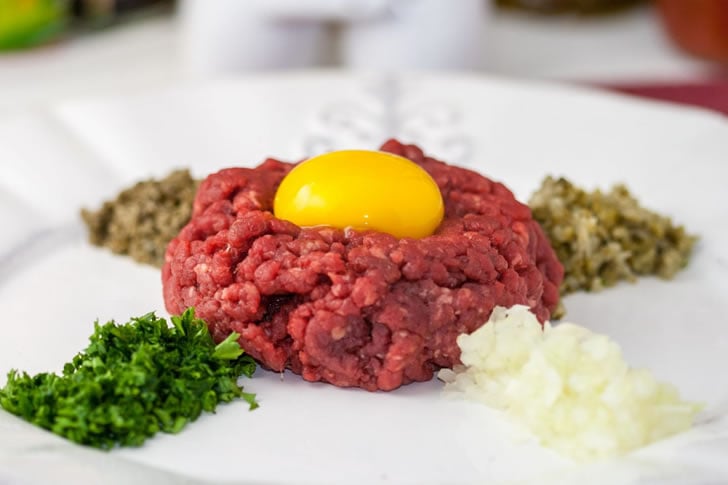 Most mouths will water upon hearing the word steak. We would probably, immediately, think of the degree of doneness we’d like our steak to be in. It could be well done, medium, medium-rare, and rare. France added the rarest steak level, and it is Steak Tartare. The steak is made from raw good quality beef or horse meat. Restaurants often serve it with raw egg yolk on top, onions, and capers. Additionally, it is seasoned with a sauce. The dish often gets  requested by tourists, and the waiter would immediately warn them that the dish is raw. But tourists still often take the risk of tasting it. Steak Tartare may be the rarest steak of all, but it still does suit risk-takers’ tastes.